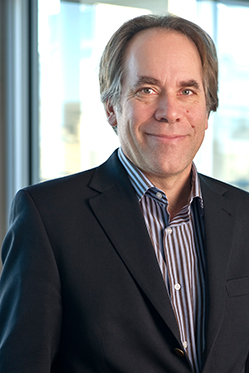 André is the mother superior of TJL. He mobilizes our forces like a field general and often predicts the outcome of a trial. His extensive trial experience has a lot to do with it: André was a lawyer in the Attorney General’s Office from 1989 to 2008. He worked on major cases in the areas of constitutional law, the Canadian Charter of Rights and Freedoms and class actions.

In 2008, André made the leap into private practice to lend a hand in the class action on behalf of tobacco victims. With 22 years of experience in public law, André led the TJL battalion, day and night, against the army of tobacco lawyers during the 254-day trial. Lucky for him, he found time for his saxophone practices on Wednesday nights – court schedule permitting – and making maple syrup in his sugar bush in the spring.

We see Andre a bit like a mad scientist of the law. He takes cases he hopes will have a meaningful impact by protecting vulnerable people. The protection of endangered species is also a moral obligation owed to future generations – and to the species themselves. Among the achievements of which he is proudest are helping protect the belugas of the St-Lawrence in 2014, the chorus frog in 2015 and the woodland caribou in 2018.

Really, we like everything about André, even his habit of misplacing our pens and our cufflinks.